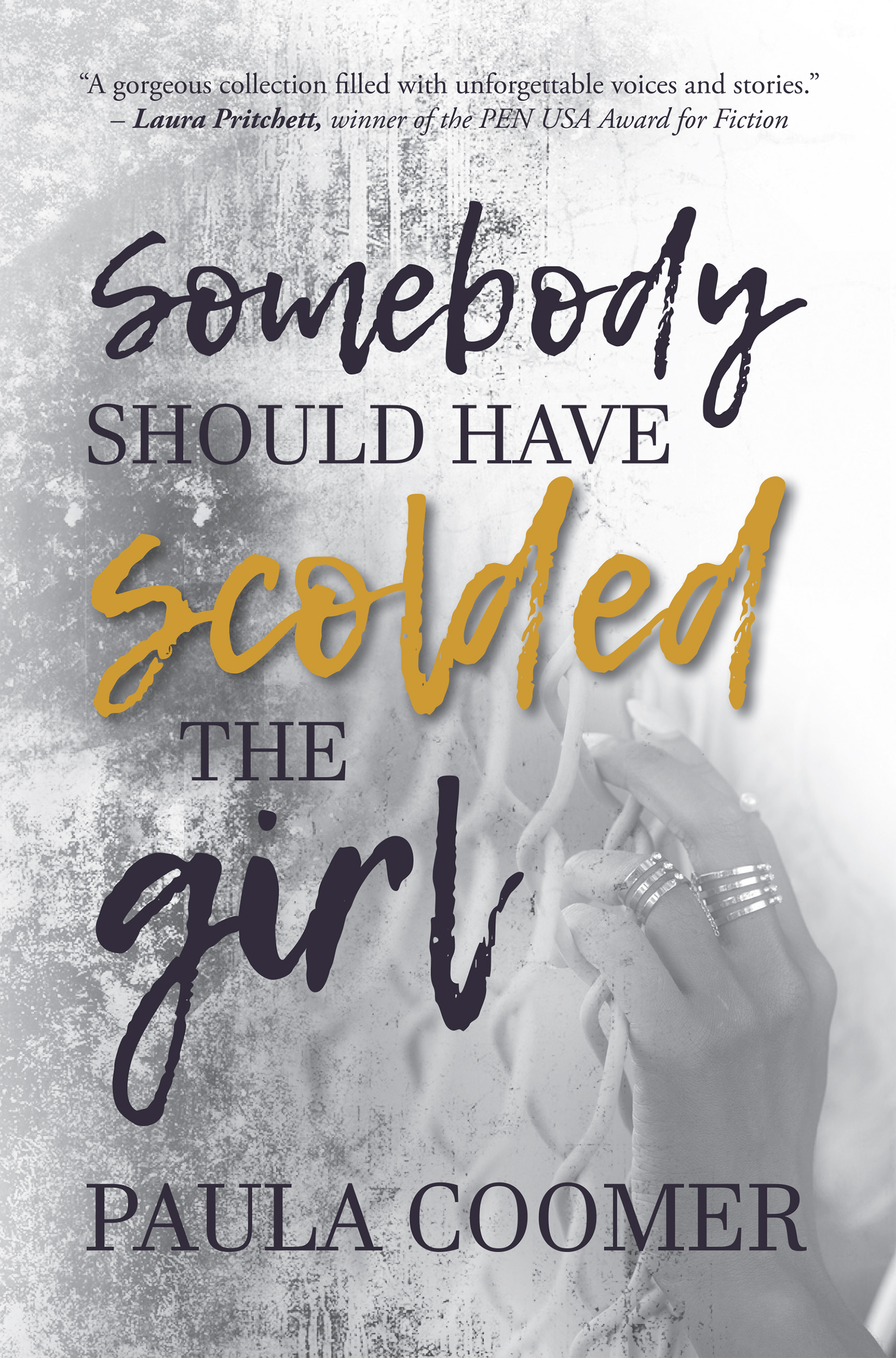 What exciting news to wake up to Sept. 10, the day of launch. Somebody Should Have Scolded the Girl was on Buzzfeed’s list of “18 Small Press Books That Deserve Your Attention.” The list was later included also on LitHub. We are all pretty stoked and proud!

I remain so grateful for Jodi Thompson and Fawkes Press, the small but mighty publisher responsible for keeping my earlier books alive.

Read the Buzzfeed and LitHub articles.

Generous blurbs from two of my favorite contemporary authors:

Paula Coomer directs an honest and unflinching look at the lives of strong, resilient, vulnerable women in rural Kentucky and Indiana—women who face prejudice, poverty, and small-mindedness with strength and grace and sometimes very-human flaws. Coomer’s knowledge of the place and culture is deeply evident; she writes in her endnote: “This collection is my attempt to . . . take my family history and create from it stories about women who own themselves, women who are victors, not victims.” Indeed, Coomer captures their hardscrabble lives with compassion, and one gets the sense that through her writing, this community of women are deeply understood and cared for. A gorgeous collection, filled with unforgettable voices and stories.

A woman discovers the power of books after Sylvia Plath’s death, a dancer pulls off her wig to show the peace sign she’s had tattooed on her head made bald by chemo, the Greyhound takes people to jail or a Las Vegas hotel room, a diary tells a secret history, and one child gives his bone marrow to another and swears to become vegetarian.

Paula Coomer’s Someone Should Have Scolded the Girl peers into Vietnam-era America through the lens of small towns and the people who are either rooted or traveling to and from. Though decades in the past, her characters feel contemporary as they grapple with gender dynamics, economics, race, the impact of war, and ultimately, how to care for themselves and their families. Set mostly in the Midwest and the upland South with ties to the West, these stories are connected by a regional identity, and what shines through is Coomer’s deft handling of the way desire pulls at us in unexpected ways and her characters’ persistent will to survive.

—Wendy J. Fox, author of Seven Stages of Anger and If the Ice had Held; winner of the Santa Fe Writer’s Project Literary Award

From “Black Oak and Sugar Tree”

Mercy Grace was completely taken in by what she saw through the lenses, the way those shining spots in the galaxy made her feel small but lucky and, in a single glimpse, helped her to see her worries as just about the same size in the span of a life.

From “A Certain Kind of Warrior”

Tate was short for Potato Head. He got a yardstick to the shins once for being so hungry he ate a seed potato raw before it got to the garden. That was the story he told. According to his mother, however, he was barely toddling and trying to say “brother” when they brought baby Van Keith from the hospital in Campbellsville to bury in the family grave site. Van Keith’s backbone was born outside his body, which happens sometimes, according to Aunt Amanda Faye’s big medical book. Tate cried so hard he couldn’t speak the word right and the word brother came out “tater.”

From “A Cup Full of Nickels”

Late into the second night, she hears the stifled exit of a pair, listens to the huffing sounds of their two bodies against the john walls, imagines them inside a bullet. She dozes without knowing it, surprised that the next thing she’s aware of is the honey‐in‐blue streaks of dawn out her window on the left side of the bus, which means they’veturned south. Now it’s the third day, and she couldn’t care less about Las Vegas. She feels like she’s
seen enough of it in magazines and on TV, worries she’ll be bored by it.

From “My Father’s Hypnotherapy”

Had it not been for the depth with which the dancing captivated me otherwise, I would have been happy staying home, pondering my problem and looking for solutions in medical books from the library, leaving them to their marital bliss. Had it not been for the fact that I could attend to the quick, controlled movements of men as they waltzed or did the mambo or merengue, no one suspecting that I wasn’t keeping tabs on the entire couple.

From “The Unread Diary of Charlotte Dodge”

Now you have a feeding tube. It turned out you have a cleft palate and can’t nurse, can’t take a nipple. You are too young for surgery, so they stuck a feeding tube down your nose. I hook to an electric pump every two hours and squeeze out the breast milk, then they have me push it slow into your feeding tube with a large syringe, similar to the kind we use to artificially inseminate livestock.

And, a short excerpt from the title story:

SOMEBODY SHOULD HAVE SCOLDED THE GIRL

The house still smells of vinegar and wet newspaper from washing the windows by the time she turns up the radio and sinks her hands into the whitish dishwater. A woman has committed suicide, the announcer reports, a famous writer in England. Marlette stops at the words children and gas oven, dries her hands, stares first at the radio, then walks over to look at her cookstove. “Kenmore” it says in nickel letters across the front. The brand Donnie’s mother owns and so, good enough for them. She opens the oven door, speckled granite and clean as new, from last week’s scrubbing with steel wool and baking soda and its own dose of vinegar. Every night before he goes to bed, Donnie checks to make sure the pilot lights are lit, the little blue flames that prove his house is safe for sleeping. Used to be no fans allowed in the kitchen. In summertime he fussed if the kitchen windows were open, even knowing how much Marlette liked to see her dotted Swiss curtains blow. “Huff ‘em out and put us all in the ground,” he would say. Donnie tried to make a cover for the stove, first of plywood scraps, then of soldered sheet metal, but Marlette wouldn’t have either of the ugly things in her kitchen. She finally found a hinged, enamel stovetop cover in the Sears and Roebuck catalog that clipped to the back of the grill surface and spent part of her saved money to order it.

“Well, I’ll be. Good enough,” Donnie had said, and when it got hot, surprised them all with a box fan for the kitchen window. Marlette kept it set to low, liked nothing better than once in a while to sit at the kitchen table, feet propped on the chair opposite, hands around a tumbler of ice water and leaf of mint and teaspoon of honey, letting that spun air whisper across her forehead, dabbing her cheeks and chin with the chilled glass.

The news announcer goes on to comment about this Sylvia woman’s life, about the way she grew up in America and who her parents were and her schooling. Shocking to Marlette to hear the newscaster talk about such things as the woman writing about hiding in a basement and cutting herself for psychological reasons. Marlette wondered what had to have transpired to make a person do that. One of her books was called The Bell Jar and another The Colossus, which for some reason made Marlette think of Greyhound buses and long-distance travel. She’ll ask him later, but Marlette doesn’t think she or Donnie has ever heard of the woman, much less had to read books by that name for school, and they both graduated from the same high school in Terre Haute. She isn’t even sure what a “colossus” is or “a bell jar,” but she knows what sound a jar makes when a lid seals, and hers are doing just that. It’s a good sound, one that verifies a job done right. Lots can go wrong when you put a seed in the ground, and the sound of a jar sealing is the reassurance it hasn’t. There’ll be pumpkin soup through the rest of the cold months, plus pie and pudding for Valentine’s and Easter and more in between and after if she’s rationed the year’s sugar right, and the flour. Out of season for some, but Donnie and the kids don’t care. Of course, raising hogs allows for plenty of lard for crusts, but they have to depend on Donnie’s A & P town job and the cash discount he gets for sugar and flour.

Marlette guesses somebody should have scolded the girl early on for expecting too much of herself and of life. She looks around at the butter yellow of her kitchen walls and the white of the cupboards, the glass doorknobs, at the slow plans she and Donnie made when they bought the place at the beginning of their marriage finally evolved into existence—new sink and washboard, the lowered ceiling and modern lamp globe, the gas cookstove, purchased to replace the wood-burning one the previous owners left behind, which is now kept wrapped in newspaper and stored in the mud porch in case the gas one ever gives out or Donnie gets laid off and they can’t afford fuel. It’s a mystery to Marlette, how other people live. But then, what’s to know—as Donnie puts it, the rich sit around thinking about themselves; that’s the only way to get richer.

(“A Certain Kind of Warrior” originally appeared in The Raven Chronicles, Spring/Summer 2016.)

(“Somebody Should Have Scolded the Girl” originally appeared in Perceptions Magazine of the Arts, Spring 2014, Portland, Oregon, May 2014.)

Goodreads reviews for Jagged Edge of the Sky