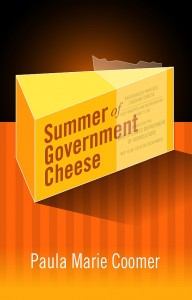 The 2nd edition of Summer of Government Cheese is available through your local bookseller as well as www.bookpeople.com, www.andbookstooonline.com, www.auntiesbooks.com.

Summer of Government Cheese was originally published in 2007 by Sandhills/Lewis-Clark. It is a collection of odd and sometimes disturbing short stories about some of the more invisible and overlooked peoples of the Pacific Northwest (I once had two men walk out of a Seattle reading after the murder scene in “Cherries”) and informed by my life experiences since arriving in the West more than 30 years ago, of having been a rural nurse, the wife of a police officer, and a traveler of back roads. If you enjoy quirky characters and long, winding narratives, you might appreciate these stories. Definitely not light reading.

From the back cover:  “I always warn folks that Summer of Government Cheese is not your basic easy-reading collection. Some of the stories experiment with form. People get raped. Women are murdered. Some people are gay. Some are not. Some are Native American. Some are liars. Some are old. Some are suffering betrayal at the hands of those they love. Some are migrant workers. Some are intellectually disabled. Some are crazy. Some are suffering post-traumatic stress. Some are suicidal. Some are Mexican people being enslaved by American corporations. It doesn’t bother me to hold up the dark mirror. We all have that side of us, and I happen to think it’s healthy to own up to it. As they say, one way to dispel darkness is to expose it to light. – Paula Coomer

“Paula Coomer’s fine work is characterized by a palpable sense of place as well as by a strong compassion for, indeed love for, her idiosyncratic characters. Summer of Government Cheese is rich with, tension, poignancy and surprise. Paula Coomer is a writer to watch out for”

–Valerie Miner, author of After Eden and Winter’s Edge

“Paula Coomer’s stories are as sparkling and unexpected as found pennies, with their promise of pleasure in turning the next page”

–Mary Blew, author of All But the Waltz and Jackalope Dreams

“What has charmed me for years about Paula Coomer’s stories evinces itself here in spades: her joyfully comic yet genuinely humane engagement with a fictive bus full of quirky and lovable characters; her meandering narratives that never lose their true course; and the drop-dead gorgeous lyricism that continually possesses her and transforms one’s sense of what language is and can do.” 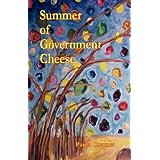 1st. ed. released in 2007 from Sandhills/Lewis-Clark