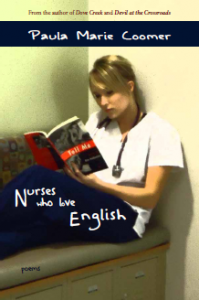 In Nurses Who Love English, Paula Marie Coomer chronicles the Sept. 11, 2001, attacks and from the emergence of war to a life wobbling under the impact of world events:  the loss of livelihood caused by federal budget cuts, a year of unemployment, record gasoline prices and mega-inflation, and a return to hospital nursing after having been a contracted university professor, with its accompanying effects on a 50-year-old body.  In the shadows, events that should have been celebrations become emotional struggles:  the empty nest, children marrying and becoming parents themselves, finding late-life love.

Lyrical, emotional, and, in the words of poet Paisley Rekdal, “both tough-minded yet fragile,” the poems in this collection reveal the conflicting perspectives of a persona struggling to survive alone in the rural American West one of the most difficult times in modern history.

In poems at once carefully wrought and yet full of spontaneity, that collage the language of Rilke together with the language of the hospital ward, the movie theater, and the homes and hearts of those down on their luck, Paula Coomer’s newest collection of poems examines the many ways in which we make art out of our lives, both consciously and not. The speakers of these poems are both tough-minded yet fragile, alive to the beauty and power of language and its ability to transform pain into moments of true personal grace.  To live, as these poems show us, is itself an art. “You asked yourself the question–have I Iived?” Paula Coomer asks in Nurses Who Love English. The answer is, unquestionably, she has.
—Paisley Rekdal, author of Animal Eye and The Night My Mother Met Bruce Lee.
Reviews:
http://cabildoquarterly.tumblr.com/post/61031992471/review-nurses-who-love-english-by-paula-marie-coomer
Purchase: Nurses Who Love English: Paula Marie Coomer: Trade Paperback: 9781936205738: Powell’s Books