True to my promise to myself, in September, when I dove into the autumn’s writing work full on, I also started breaking up my day at the desk by getting out and going for walks. I have a standing desk. I joined a gym. Even though I have a bathroom off my office, I make myself go to the downstairs one, the prettier one with the stained glass window, since it means I have to climb back up, hence gaining the benefit (the body burns 4X more calories going upstairs than walking on a flat surface).

Because I’ve been able to devote my life now to writing and publishing, I find I have different energy needs. Where before I needed complex carbs to fuel the brain for the kind of analytical activity that teaching and evaluating student writing is, now I need to fuel the creative hemisphere, which for me has always thrived best on pure foods like nuts, fruits, and vegetables. But, occasionally, and especially as I work to restore muscle mass, I feel driven toward the more-than-usual pursuit of protein. In fact, I’m pretty sure this is also an annual thing: I am prone to need greater amounts of it when the leaves fall.

Lately I’ve been daydreaming about creating in the kitchen. Rainy weather brings it on. Sundays used to be a day we made a nice brunch for ourselves, but this past year we got out of the habit. Craving a hearty pancake and a bit of protein on a recent Sunday morning, I scouted the pantry to see what we had stocked. I love love Blue Moon Vegan’s Skillet Cakes (p. 47) and aromatic Fragrant Pancakes (p.48), but I also had been wanting to experiment with ground chia seed and a combination of apple cider vinegar and soda with coconut oil for fat, a combination not used in the other two recipes. Not to complicate things, but I had also been feeling my annual autumn hankering for buckwheat, which is my favorite type of pancake and an artifact of my childhood, a reminder of home and chilly weekends when the griddle helped warm the kitchen. The result did not disappoint, not in the least, and the batch made enough to fill us both very well with enough left over to freeze.

I estimate each 5-inch cake to have about 5 gm. of high-quality protein, plus a slew of omegas, fiber, and mid-chain amino acids—a type of fat metabolized in the same way that complex carbohydrates are. Normally I would have topped them with Grade B maple syrup, which I love for its wood-toned flavors, but right now I just happen to have jars and jars of homemade pear butter, which was a fine and heavenly topping for Buckwheat Pancakes. A smear of homemade organic almond butter didn’t hurt, either.

Afterwards? I read a book for thirty minutes, then took off for a hike. 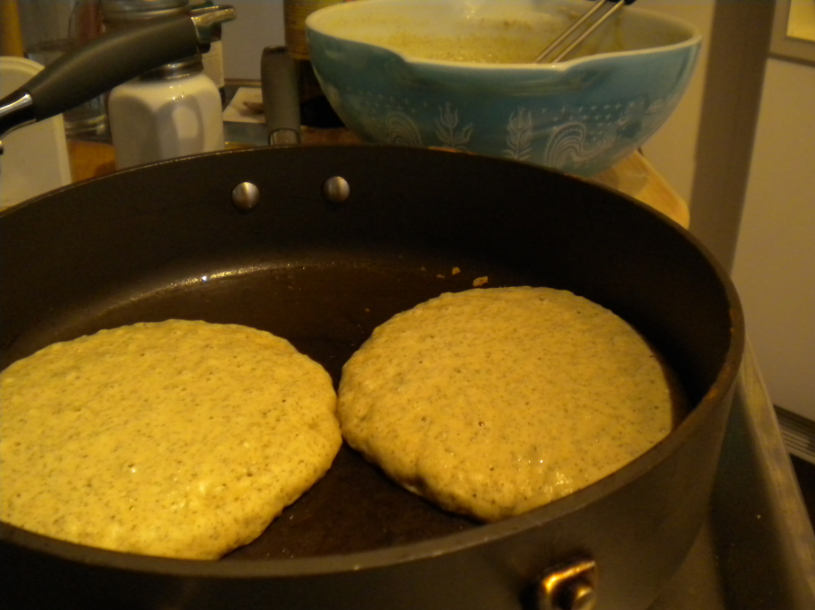 Spray griddle with sunflower oil (a well-seasoned cast iron griddle works best; ours is big enough to cover 2 gas burners, so we can cook lots of cakes at once). Heat over medium heat until droplet of water sizzles. Spoon batter onto griddle approximately 1/4 cup at a time. Cook over medium heat until small bubbles are visible in the doughy side of the cakes. Flip when cakes are covered with bubbles and well-set. Continue to grill until both sides are toasty brown. Serve with nut butters, jams and preserves, agave syrup, honey, or maple syrup. Makes enough pancakes to freeze (about 2 1/2 dozen 5-inch cakes. Prepare frozen pancakes by heating in toaster or toaster oven.