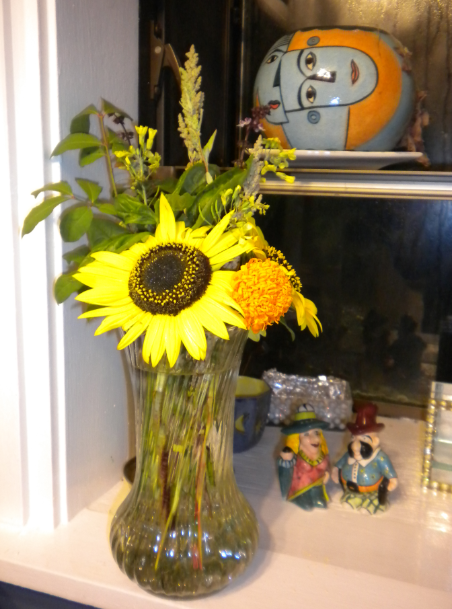 I think I go through it every year at this time. I don’t even know what to call it: shutting down, transitioning, equinoxing. It feels a bit like a virus coming on, as if something has taken over, disorienting my brain, knocking me off my equilibrium. Is this what trees feel like just before their leaves start falling?

Perhaps it is something in the air that reminds my body that it is approaching the anniversary of that moment nearly 58 years ago, when it got itself into position, head down and engaged with my mother’s birth canal, to prepare for the final descent into this new oblivion called life, seven short days later a new self to be born.

The autumnal equinox is to me the most lovely of days. A reason to sit still, to ponder, to reflect, to review the past twelve months and look ahead to the slowing days of a new season—the early dark, the cooler air, migrating birds, blue skies whitened by wood stove smoke, by weather systems wafting across the prairie, and, if we are lucky, grayed by days of rain.

I wonder what my mother was doing on the autumnal equinox in 1956, in that week before I, her firstborn, arrived. Living in a musty apartment in Louisville, she and my father married just long enough to make me not quite a love child but a honeymoon-passion child. Daddy loves telling the story of meeting Mom for the first time: “She was a little bitty ol’ thing. She had a milk mustache, and she was eating a leg of fried chicken.”

I love imagining that scene. At that moment she would have been nineteen. She and Dad knew each other less than a year before they decided to get married. 1956. Things were quite different then. Pennies for a gallon of gasoline. Also that chicken leg. Rent a few dollars a week. Dad didn’t make very much but enough to support us all if he moonlighted a bit.

Some years ago at the Louisville airport I struck up a conversation with a woman who was born the same day as I in the same now-defunct hospital: St. Joseph’s. Our mothers would have been in the same ward together. A long narrow room of women divided by drapes or screens on wheels, all in the various stages of delivery. All of us squalling newborns greeting the world in the same place.

The woman in the airport made her living as a bartender. I make mine as a writer and a teacher of writing. We are not so far apart. She listens to stories. I write them. She was much thinner than I, had fewer teeth. Her life story involved dead children and marriage wrecks, including her current one, which was a long-term live-in and fraught with alcohol abuse, and a new dental plan that was going to help her fix those rotting teeth. Mine involved years working as a nurse before going to graduate school, dramatic years with the Indian Health Service, healthy children, two marriage wrecks and one really good one.

Those were the details of my life that came to mind at that moment, at least. Why I chose those particular ones to share, I can’t say. Perhaps a part of me did not want commonality with her. Perhaps I was being a braggart: see what I’ve been able to do? What happened to you?Still, we weren’t each other’s doppleganger. We weren’t parallel, in fact had run different races, yet we shared a starting gate of sorts. “It’s weird, isn’t it,” she said, as we compared driver’s licenses, hers from Kentucky, mine from Washington state.

“It is,” I said. “I feel like it should mean something, meeting you today.”

“Well, it does,” she said, “it does,” but she didn’t have any other defining opinions. And me, well, I’m always looking for the magic. Looking for unobvious, behind-the-scenes order in the universe.

That was two years ago, in December, six or so weeks after we’d turned fifty-six. Turning fifty-six and we were born in ’56. “We are the squares of ourselves this year,” I said, but it was clear she didn’t know what I meant.

I walked away understanding that life had, if obliquely, held up a bit of a mirror for me. Showing me how lucky I am, how easily my painful life could have been much worse. I wonder now, two years later, if she has ditched the alcoholic-live-in, gotten her teeth fixed, and if she is still waiting tables and pulling drinks. I wonder if she wonders about me, whether she imagines a life of lecturing, writing, grading student essays, of wading through the stalled days as another of my grandchildren sits parked in his mother’s birth canal before launching himself into existence.

At the time she had not one single grandchild. Not one. I wanted that for her more than anything. Life had given her children but had just as quickly taken them back. I don’t know the details. She didn’t share them, save to say that no kids were in the stars for her. It makes me sad. I’m not sure a person can understand his or her own existence until he or she has parented another. It makes me want to find the business card she gave me and send her a bouquet on our shared birthday.

I wonder which old wallet that card is in? The expensive one with the clasp that never latched? Or the embroidered change purse from the art fair with a zipper. The one I used to keep in the soft-sided briefcase I carried between classrooms and on planes.