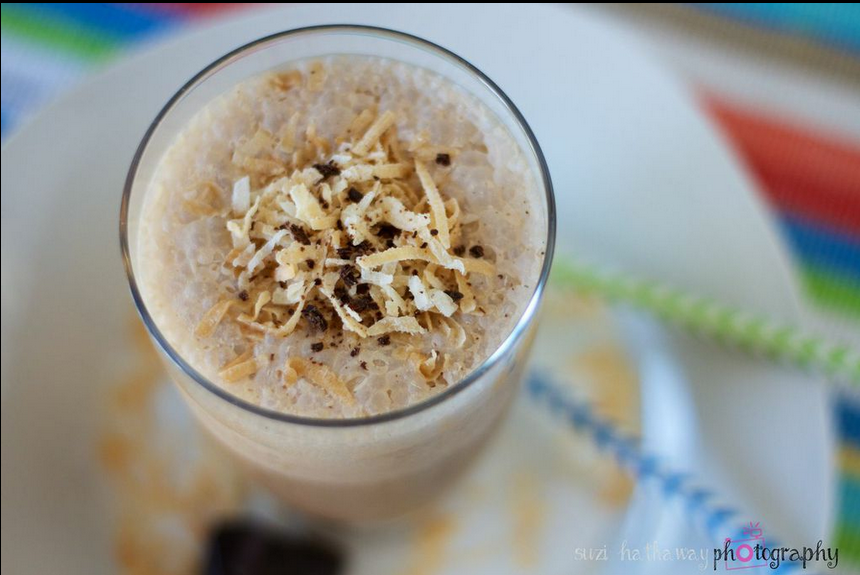 Hip is not my style. I don’t follow anyone’s lead. Can’t. It’s not in my genetic make-up. So, surprise, surprise, there we were in the middle of shooting photos for Blue Moon Vegan in the near-to-waning middle-of-the-day light when the subject of mochas and frappuccinos came up, and I said, “Never tried one.”

“Why on earth not?” I believe was the approximate response from my photographer, Suzi Hathaway, of Suzi Hathaway Photography in Meridian, Idaho.

“I just drink coffee,” I said. “I don’t see the point in spending all that money on sugar.”

And just why was this a subject? Two something-something females shooting photos for a cookbook? Why were they suddenly talking about frappuccinos?

Who knows, except to say: pregnant photographer; self-proclaimed coffee addict away from her rural home and in the big city for two weeks.

“Well,” I said. “Now seems as good a time as any to try to figure out how to make one.”

So I did. I don’t know why I thought it had to include toasted coconut. Something Suzi said? Maybe. She said lots during those days and weeks of cooking and shooting photos that made my creative wheels spin. And to watch her? Like a Picasso, a Kahlo, a Cassatt. I got the impression that she was not shooting photos, but the life and vitality in the foods in front of her. That she was shooting still lifes, not recipes. None of the sprays and shellacs that food photography is so famous for. Just good, organic and local ingredients, good light, and a very, very elegant eye.

So, I got busy with toasted coconut. Suzi found some coconut flavoring in her cupboard (she does most of her work from her home), and we were off and gone.

I don’t want to say too much more. Let the photo speak for itself. But this is such a wonderful Saturday morning treat, and with Valentine’s Day on Saturday this year, why not just pick up a few little extras at the grocery store to surprise your honey? And if you really need to, float a few of those little conversation hearts on top. The ones that say, “Be mine.”

To toast coconut, grate fresh coconut and dry in the oven at 200 degrees. Once dry, toast in the oven at 275 degrees until light brown. Combine warm coffee, coconut sugar, and chocolate in blender and process on high for several minutes. Add both extracts, coconut milk, and sea salt and blend for several more minutes. Crush ice and add to blender,  then use the whip feature to process for 3‒5 minutes. Garnish with toasted coconut and grated chocolate. Serve immediately. Makes 2 servings.