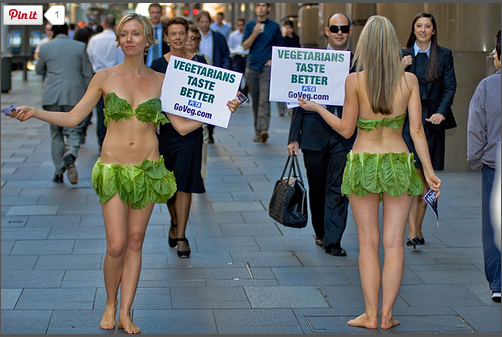 Oh come on. Do you really think entire cultures would shun animal products if all they got to eat was salad? Do you expect major world religions would embrace the notion that eating lettuce lights the path to nirvana? Do you think politicians and celebrities by the score would sacrifice taste and satisfaction merely for another photo-op? (Okay, well, maybe yes on that last.)

In truth, anyone alive in our world today knows this one isn’t true. The industrialized world is riddled with vegan and vegetarian restaurants offering everything from haute cuisine to bean burgers. Walk into any bookstore and pick up one of the latest vegetarian or vegan cookbooks and you will likely see anything BUT salad. Amazon features roughly 9,000 vegetarian or vegan cookbooks, with more added almost daily. If each book averages 100 recipes, that would add up to 900,000 ways to use romaine.

The newest books range from the wildly popular Thug Kitchen, which mingles its superior instruction with hilarious profanity (not that the F-word is never mentioned in my kitchen, but trust me, anyone with a mouth like that you don’t want to meet in a grudge match) to Oh She Glows, which is authored by one of my favorite cooks and vegan recipe gurus, Canadian Angela Liddon, who, if you check out her website at www.ohsheglows.com, you will learn has wimplessly battled gluten-intolerance and an eating disorder, and looks more like a fashion model than anything else.

And then there is me, poet and literary author, veteran mother and grandmother, dozens of pounds overweight thanks to having been born attached to a writing desk and chair, a former body-builder with a Godzilla of a sweet tooth and a glare that would level Attila the Hun, and, who, soft-hearted as I am, having survived a life of hard-scrabble living and despite my liberal leanings, is anything but wimpy, and despite having inhaled a time or two, is anything but a hippie (although I do approve of my oldest grandchild’s new-found affinity for peace signs over princesses).

And, even if that were not the case, trust me, those 1960s, war-protesting, culture-challenging, back-to-the-land farmer hippies were ANYTHING but wimpy. That in itself is a monstrous stereotype, and I defy anyone under thirty to—intellectually or physically—arm wrestle a single 70- or 80-something one of them.