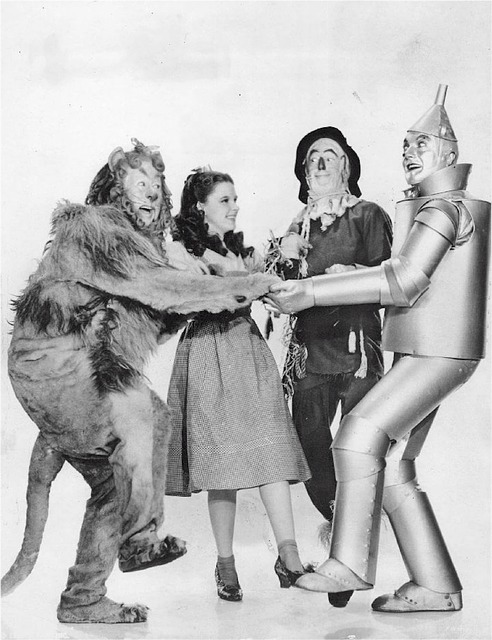 The Wizard of Oz was a favorite film of mine when I was a kid. It scared me to death—the tornado, those dead curling feet, flying monkeys, the Wicked Witch of the West—but I was used to being scared. I lived in the country, after all, and we had lizards, and a rat who lived in our laundry room where the chamber pot was kept. My nightly dilemma involved decision making—go into the laundry room where the big wringer washer with its mother-eating (or so I imagined) wringers waited along with Mr. Rat; tiptoe out the front door and into the dark night (Quietly! Don’t slam the screen door!) to the outhouse where a snake once fell from the roof to my father’s neck; bare my behind to the elements and tinkle on the grass where a similar snake or lizard or lion (!) or tiger (!) or bear (!) might take a big chunk out of me.

Which is to say that more than once I lay there until nature took over, which is why my mother made me sleep on a rubberized sheet, and why I was on the sofa. The sofa was Naugahyde. Naugahyde didn’t absorb liquids.

Eventually we moved to town to a house with an indoor bathroom. But that house was haunted, and it was still Indiana, so there were still tornadoes, and a couple of times an earthquake. Then there was my mother’s black belt. Fear remained the dominant emotion in my little girl’s heart—to the point that by comparison there was nothing scary at all at the age of twenty about packing my ’64 Falcon station wagon and heading out West, to see what there was to see.

So much so that for the next twenty years, I followed fear. I consistently chose to do the things that made me feel most afraid—leaving my husband, taking my children to the Idaho outback to an Indian reservation, turning my back on a perfectly good career with a nice, fat paycheck and early retirement to become, of all things, a poet and fiction writer.

Six years ago I took a step that made me afraid, too. I sent off the manuscript for my novel Dove Creek to a publisher in Seattle.  It was all about a woman who leaves an awful husband, one who beats his kids just as she had once been beaten by her mother, a woman who takes a job on an Indian reservation for the puffed-up government paycheck that keeps her and her children sheltered and fed. A manuscript that had been rejected forty-six times. That publisher, then called Libertary Press, eventually became the innovative, maverick publishing house Booktrope. They not only put Dove Creek between covers, but over the next nearly six years published four more of my books. Booktrope authors numbered more than six hundred and saw published almost 1000 books in every genre from academic to legal to sales to poetry to fiction—many award winners and recipients of starred reviews in such industry publications as Kirkus Review and Publishers Weekly—in every genre color of the rainbow and for audiences as diverse as lovers of contemporary literature and vampire gore aficionados.

I so adored working with Booktrope’s fantastic crew that when they offered me a job as part of their author support program, I happily accepted, and for the last fourteen months have coordinated that service for them, creating author training and guidance materials, plus holding weekly meetings where authors could bring their own fears and questions.

On top of that, the people running the show were among the nicest, most supportive, most talented, most creative, most professional, most intelligent folks I’ve ever known.

Sadly enough, the wonderful world that was Booktrope will come to an end on May 31. More than 1000 of us authors, editors, proofreaders, artists, and designers will set off on our individual yellow brick roads, looking for new places to land, hopefully sidestepping all the wicked witches and flying monkeys crouched in the shrubbery along the way. I’m very lucky to have been picked up by an incredibly supportive publishing house called Fawkes Press, thanks to which all my Booktrope titles are getting a little buff-and-shine and cosmetic touch-up and will be released anew on June 1.

It’s a little bit scary, heading off into an unknown future, not to mention free-floating without a job, hoping to scare up a few more manuscript consults, workshop bookings, and launching myself as an author advice maven. I like to think I’ll arrive at a station that’s even lovelier and glitzier than the one I left. Hard to say at this point, but one great advantage to having stared down fear so many times is that I sure as hell know how to do it.

Wish me luck, and warn me if you see anybody planting poppies!